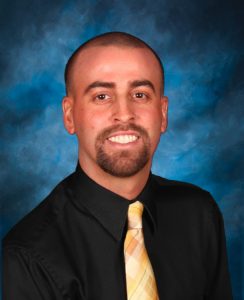 Coach Mickey Armstrong has been Head Golf Coach for the Green Wave and Lady Wave since 2012. He is a 2004 graduate of Gallatin High School where he was a 3-sport athlete playing golf, bowling, and baseball.

In the Fall of 2004, Coach Armstrong continued his athletic career on a golf scholarship to Union University. He received NAIA Academic Honors in 2007. In the Spring of 2008, he graduated receiving the Academic Award of Excellence.

Coach Armstrong returned to Gallatin High School in the Fall of 2008 where he was hired as a Vocational Assistant, and began his coaching career as the Freshmen baseball coach. Over the next 2 years he completed his Masters in Education through Cumberland University and was hired in the spring of 2010 as a Special Education teacher at GHS. In the Fall of 2012 Coach Armstrong accepted the position as Head Boys and Girls Golf coach.

Coach Armstrong is married to Whitney Armstrong and they have two children, Eva and Zeke. They are members of First Baptist Church in Gallatin.

Kenny Armstrong is a 1971 graduate of Gallatin High School and has been a non-faculty coach since 2011. During his senior year at Gallatin High School he was a member of the first ever GHS baseball team. Coach Kenny Armstrong was the starting pitcher for the first game. Coach Kenny was hired by the Hendersonville Fire Department in August of 1974, and retired from the city of Hendersonville in February 2015 with 41 years of service. During his time at the Hendersonville Fire Department he held ranks from Firefighter to Assistant Chief and spent 20 of those years as a Division Chief.

Coach Kenny has been involved in the city of Gallatin as a coach starting back in 1972. He has coached recreational league baseball, basketball, and most recently as the assistant golf coach at GHS.

Coach Kenny Armstrong is married to the former Karen Carman, and they have one son. They are members of First Baptist Church in Gallatin.

No Events This Week

Events are added by athletic staff.
View All Events